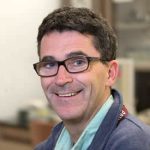 Dr. Mark Inman completed his initial training in exercise physiology at the University of Waterloo (BSc '84, MSc '86). He then came to McMaster University to study the mechanics of breathing with Drs Kieran Killian and Moran Campbell (PhD '93). During this time he also completed a medical degree (MD '93). Rather than continuing with clinical training, Dr Inman chose to pursue a career in medical research, and began a 4 year post doctoral fellowship in the laboratory of Dr Paul O'Byrne. At this time, Dr Inman's research activities were divided between studies of the management of exercise induced bronchoconstriction and the role of the bone marrow in supporting allergen induced inflammation. Following his post-doctoral training, Dr Inman accepted a faculty position within the department of Medicine at McMaster. Since joining the faculty, Dr Inman has divided his time between research and educational activites. His research had focused on the mechanisms of airway hyperresponsiveness, a condition thought to play a major role in the frequent episodes of bronchoconstriction experienced by patients with asthma. To address this, Dr Inman has relied on models of allergen induced airway disease in mice, as well as sophisticated technology with which to assess lung function in small animals. Many of the models and research techniques were developed within Dr Inman's laboratory, either by his graduate students or his technicians, Russ Ellis and Jennifer Wattie. To date, Dr Inman has authored or co-authored over 100 peer reviewed manuscripts. Dr Inman's teaching interests have remained in the area of respiratory physiology; he currently teaches a graduate course in Respiratory Physiology that is also part of the required training for respirology residents at McMaster. Dr Inman also has a lifelong interest in research design and frequently offers sessions addressing common misunderstandings in various graduate student training forums.

"The program combines not only research and science but also policy and business, which are very important aspects of translational research.”